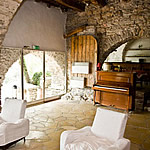 Centuries-old legends and traditions have given us a strong desire to keep them alive in our region's festival.